Hello everyone! This is my first post ever. I'm not used to write too much in English, so this is an entirely new thing for me. I'll try to be succinct so you don't notice how poor my English skills are.

So, getting to the point.

Yesterday I published Space Reavers on my itch page. My first intention was to publish it as fully illustrated art zine, but I thought it would be easier to playtest with my friends online if I got to make instant character generators. A friend helped me figure out how to make it using twine and suddenly I got so excited that I decided to make everything there. The current ruleset is fully described in the how to play section. There's also a very short text on how to prepare a session using The Cantina and The Spaceverse sections which I want to expand on this post.

The Spaceverse is a cardcrawling adventure generator. It's like a hexcrawl, but instead of hexes with fixed scale and six-point connections you use playing cards with varying scale and no clear connection to one another so you can arrange them on the table any way you want: 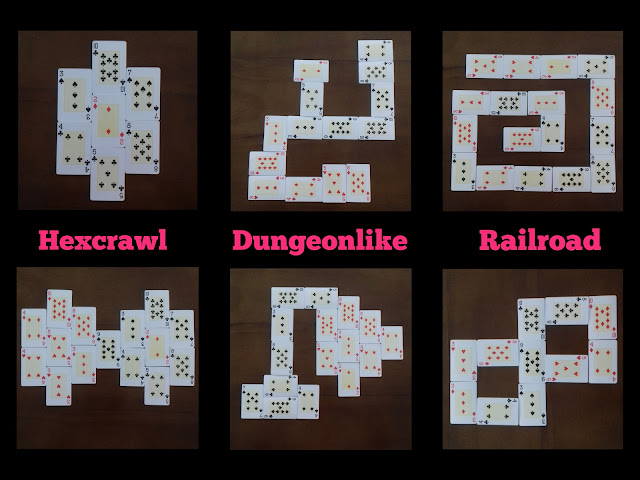 The scale is open to the GM to decide. The setting could be a planet's wilderness, a megacity environment or even an underground dungeon. You can also use it as star system or sector if you consider that each card is a different planet; you could also generate a setting for each card, it's really up to how much work you want to have.

The Spaceverse generates 3 factions and 3 monster types, one of them being a Megamonster. One of the factions is a Megafaction that basically rules the place. The smaller factions are always at conflict with one another, running away from the Megafaction or being oppressed by it. There are many ways you can use this in your campaign: Players could start the game being part of one of these factions and getting involved in their conflicts, or they could be just foreigners trying to manipulate everyone to advance their own interests or even just a couple of idiots who crashed their ship on a strange planet.

The generator creates a unique place for each card and then it decides if that place has an encounter or not and what you encounter. Unfortunately, my coding skills were not enough to allow you to save the setting and re-roll all encounters, but I'm working on that. For the time being, I suggest that you create your own list of random encounters to be rolled after revisiting each card.

Now, about space travel. I  wanted to let this open for the GM to decide how to do it, but I can give you a few suggestions to handle it:

Your ship has two stats: HP and Fuel, each starting at 10. You spend fuel only traveling to other planets/sectors/settings. If the ship has guns, assign how much damage it does to other ships. Any tests to hit or to avoid damage are rolled using the ability score of the pilot.

If you want something a little more complex, give spaceships the same stats as characters:
STR for firepower, DEX for maneuvers, WIT for systems and HP for integrity and fuel, both being tracked separately. You can let players roll a starting spaceship using 2d6+3 for each stat and 1d6+3 for HP. Stats may be raised in mechanic shops using 2000 credits for each point.

You can either give a fixed price for Fuel (like 10 credits for point) or use dice to determine how much it costs in each region/station. Players could also choose to fuel the engine using organic matter at the cost of all ship tests being rolled in disadvantage.
So, that's it. If you have any suggestions or feedback please let them in the comments below.
Also, maybe you would like to play Space Snacks, a text-based solo RPG based on Space Reavers made by my friend Janos Biro, where you control a random reaver on a random planet trying to fix your ship to escape. You can explore the place, interact with strangers, steal things from stores, run in jetpack races and bet your money in robot fights! Pro Tip: you can use a hacking kit to help in your gambling activities. Go check it out!
às maio 30, 2020 Nenhum comentário: